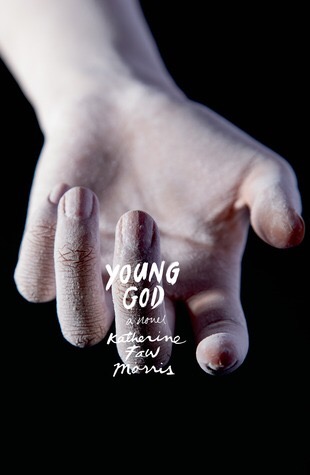 Review for “Young God” by Katherine Faw Morris
Rating: 4 out of 5 stars

The reason I was drawn to this book was through hearing of its author, Katherine Faw Morris. She’s from a small county in northwest North Carolina, about 80 miles from where I live. The second thing that drew me in was its intriguing title. What could a book called “Young God” possibly be about? Within 10 minutes of reading this debut novel, my question was answered.

The protagonist of this book is 13 year old Nikki, the daughter of a notorious pimp and “the biggest coke dealer in the county.” We never get a proper backstory for Nikki, although it’s hinted that she has spent some time in a group home prior to the opening of the story. At the beginning of the novel Nikki witnesses her mother fall sixty feet into a swimming hole, her body slamming into sharp rocks on the long way down. Nobody cares about it or mourns her, it’s clear early on that emotions have no place in the bleak landscape of this novel. Several pages after her mother’s death, Nikki consoles herself by going home and having sex with her mother’s boyfriend.

It’s a sonorous start for a book, and it doesn’t take long for Morris to completely dismantle your moral center. In the eyes of 13 year old Nikki, events like murder, rape, prostitution, and drug dealing take place with the same normality and regularity as the morning paper. The bizarre father and daughter relationship between Nikki and her father, Coy Hawkins (he’s never addressed as “dad,” but called by his first and last name only throughout the entire book) is at the center of this novel. At one point in the book, Nikki brings her father another young girl, because, of course, virgins make more money. It’s the most horrific case of learning by example, and young Nikki picks up fast. She learns how to buy and sell heroin after seeing her father do it once. And, as we witness for ourselves, she becomes extremely good at it.

Morris does not portray Nikki as someone the reader should pity. Instead, you feel drawn into a connection with her, one that alternates between fear and a creeping sense of foreboding. You feel scared for her, because you know that she probably won’t live to see her fourteenth birthday, and scared of her and her dangerous efficiency. The ending offers the reader no comfort either. While Nikki ‘wins’ in the final pages you still get a sense that her future holds the certainty of more violence, drug dependency, and ultimately, death.

At only about 20,000 words it’s easy to read this book in one sitting. Scenes jump chaotically from one to the next and you’re left wondering what happened in the blank spaces. The writing is sparse and frenzied, with some vignettes going on for several pages and some only consisting of one sentence. The brevity of this book only adds to its raw power, not a single word is wasted here. Morris’ choice in making this book brief was a wise one, if it had been any longer I could not see myself continuing to go back to read it. It’s a one time punch to the gut. And man, I liked it.