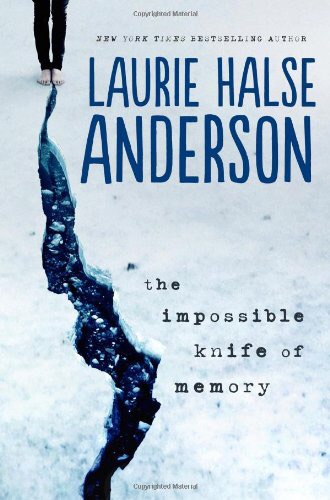 Review for “The Impossible Knife of Memory” by Laurie Halse Anderson

Not a terrible book, but a book that felt very wrong to me, especially as the spouse of a PTSD sufferer.

My husband is a combat veteran. He served in the Air Force for almost 20 years, and in that time he served 4 tours overseas, including one in Kuwait (Desert Storm) and one in Iraq. I know about the nightmares, the alcohol, the depression, the silences, etc. I don’t have a problem with the author’s choice to talk about PTSD in a young adult novel, but the way she presents the narrative–through the eyes of an annoying and overly angry 17 year old girl–was completely disappointing.

The characterization of the main character, Hayley, is at the heart of everything that’s wrong with this book. She is cold, close-minded, and judgmental of nearly EVERYBODY she comes into contact with. She hates everything and everyone–teachers, people in authority, girls, boys, kids at school she perceives to be better off than she is, school, life, her dad, her dad’s girlfriend. In her opinion, people are either “freaks” or “zombies” and there is no in between. I understand that Hayley has been through a lot with her dad and has a shitty attitude for that reason, but she was so over-the-top angry about everything and everyone that she was completely unrelatable and hard to sympathize with. She did have one female friend, Gracie, but throughout the book I wondered how they became or even how they stayed friends, given how hateful she was. Which brings me to another issue I had with this book…Hayley’s boyfriend Finn. I just didn’t get him at all. They have a very awkward romance and throughout the entire story she never really stops being bitchy towards him. He begs her to write for the school paper (which never materializes), follows her, won’t take no for an answer until he eventually just…stays. There’s no rhyme or reason to their relationship, or any discernible reason why he’s so intent on being with her. Although their courtship is somewhat cute, it just didn’t seem realistic to me.

Another underlying current I didn’t like was the fact that Hayley spends a large portion of the novel hating her dad’s girlfriend Trish for a reason that’s never fully explained or elaborated on. While it is revealed that she was a drunk who walked out on Hayley and her dad while he was overseas, the same flashbacks reveal her father to be an abusive, alcoholic shithead who put up his fair share of crap in the relationship too. So what if she left? I wanted to scream at this girl. She had every right to leave. At least she got rid of her drinking problem and thought enough about you to come back and try to make things right. No bueno though…it just comes off as yet more woman-hate spewed by a completely inept and poorly crafted character.

This book was nearly 400 pages but should have been 200. Needless drama and angry brooding about a subject that got way too sanitized in the process. I loved Laurie Halse Anderson’s ‘Speak’, but this didn’t come close. 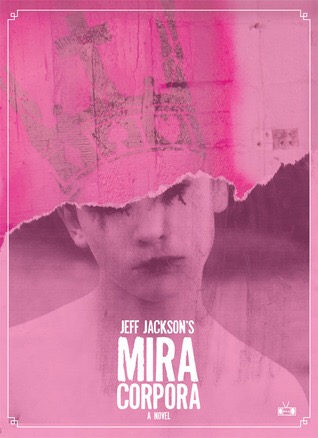 Review for “Mira Corpora” by Jeff Jackson
Rating: None

I won’t rate this book because ten minutes after I have finished reading it I am still not exactly sure of what I’ve read. Perhaps knowing what I read is not the author’s point, or maybe the big question mark I have here is exactly THE point, because it kept me intrigued long enough to sit through 186 pages, only to sit in a stunned silence when it was over, staring at the cover like WTF?

Eventually I will probably have read this again to gather up the (rather large) pieces I missed, but I can say that this is a very very unusual novel with a style that seems more like a Harmony Korine film than a book. There are weird people, weirder places (the main character spends a LOT of time in the woods), and the major scenes from the characters’ life is broken up into sections with quotes. There are also a lot of times in the book where I could not differentiate between the character’s dreams and his reality, they blended so perfectly that the whole story had an almost ethereal kinda quality to it. Very cool.

I would read this book if you are interested something different, far outside of the mainstream confines of the NY Times bestseller.

Review for “Sweet Nothing” by Richard Lange
Rating: 4 out of 5 stars

At this point, I will read just about anything that Richard Lange writes. I was wowed by his short story collection “Dead Boys,” impressed with his novel “Angel Baby,” and even though I was a lil less than happy with his other novel, “This Wicked World,” it’s ok. I love his subject matter–people who find it hard to fit in and fly right. In any other novel you’d dismissively call his characters losers and turn the page, but Lange paints his characters so lovingly that you are willing to forgive them for their missteps and give them another chance. His writing is always fresh and entertaining. Take this line from “The 100-to-1 Club”:

“My day began in a jail, and now I’m trapped in a racetrack shitter. Somebody’s made some bad choices. Again.”

This short story collection does not disappoint. There are guards, gamblers, ex junkies, and border crossers, and manners of people in between that make up the fabric of this lovely book. In “Must Come Down” we encounter a young father whose father in law’s ‘business’ proves way more than he can handle. In “The Wolf of Bordeaux” a good natured prison guard attempts to protect an inmate accused of a terrible crime. In the “The 100-to-1 Club,” a gambling addict risks all for a bet and loses everything in the process. In “Apocrypha,” an ex criminal finagles his way out of a burglary plan, just in the nick of time. And in my favorite story, “Sweet Nothing,” an ex junkie finally makes the right choice and reaps himself a great reward.

As I said before, I loved this book. I would recommend it to anyone and would be terribly disappointed if it doesn’t end up on the “Best Of” lists for 2015…

From an essay by Ian Brown on keeping a notebook, as published in the Globe and Mail:

“It’s a neurotic habit, a personal notebook. It can work as a diary, but it’s not intended for publication…A diary is an accounting. A notebook, by contrast, is to record details that reach out as you pass, for reasons not immediately apparent. A notebook is full of moments from days that have yet to become something. “Keepers of private notebooks are a different breed altogether,” Joan Didion wrote in a famous essay about notebooks, “lonely and resistant rearrangers of things, anxious malcontents, children afflicted apparently at birth with some presentiment of loss.”

I have always kept some kind of notebook from the time I began writing, when I was 10 or 11. All kinds of stuff would go in there, homework assignments, what I wore for school, funny observations about people I was too shy to discuss with anyone (“she wore that sweater yesterday, her hair smells like cheese”), diary entries, ideas for stories. I can’t find a single trace of these notebooks today, but I can tell you that to this day, my notebooking habit endures. There is my trusty red moleskine notebook/planner that I write EVERYTHING in (appointments, meetings, interesting things I watch on TV, books I’d like to read, what bills to pay and when) and my plain brown, Staples composition book that functions more as a diary. Here I do not edit, and write completely without censoring myself. I never intend to publish what is in my diary because I’ve always looked upon it as a playground for exploration, a way to process certain events and understand them. Anyone who is serious about the craft should probably be writing in a notebook, it’s the best (and cheapest) therapies you’ll find. 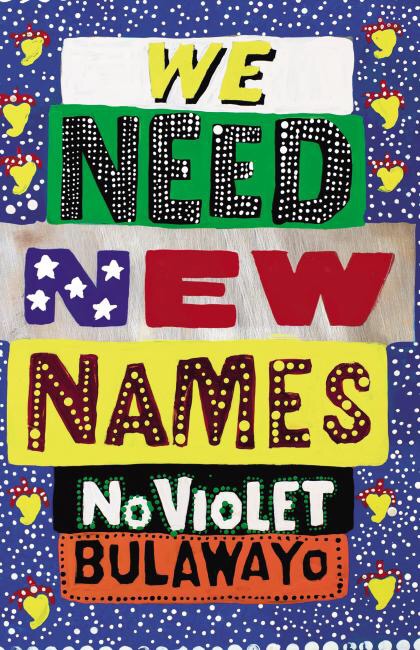 Review for “We Need New Names” by NoViolet Bulawayo
Rating: 4 out of 5 stars

I liked the first half of this book. The language is rich, the characters realistic, and the main character’s voice soars off of the page. The novel is set in Zimbabwe in the late 90’s, where we first meet Darling, a likeable, whip-smart young girl living in an ironically named shantytown called Paradise along with her interestingly named friends (Bastard, Sbho, Chipo, and Godknows). Bulawayo does not give us a pretty picture of Paradise, however. There is crippling poverty, daily starvation (with Darling and her friends stealing fruit from trees to survive), the government’s systematic destruction of what little homes Darling and her neighbors have, and one of her 11-year-old friends is pregnant (presumably from a rape by a family member). Despite the bleak landscape of the novel I loved the fact that Bulawayo chose to portray her child narrator with equal parts of innocence and resiliency. There was a fair share of times within the book where I found myself laughing out loud at Darling’s observations–a trip to church with her grandmother, as well as her account of NGO workers, who take pictures of them and give them “loads of things they don’t need.” It’s a harsh world, but a beautiful one in which the children dreamingly drift away their days without school, playing games and eating fruit.

I wouldn’t advise people not to read this book. Bulawayo does not waste words, each chapter was strong enough to stand as a short story on its own. Bulawayo is a good writer, and I loved the solidness of her prose. I look forward to her further writing in the future, she is definitely one to watch.

Review for “A Girl is a Half Formed Thing” by Eimear McBride
Rating: 1 out of 5 stars

I got about 25 pages into this before I called it quits.

This book is written completely outside of the conventions of English. Mostly stream of consciousness, fractured phrases, fleeting glimpses, impressions. This is not my main criticism here, however. I’ve read plenty of books with the nuances of busted English, no quotations, no full sentences and it still managed to be pleasantly readable. But THIS was an exercise in futility. Take the first paragraph, for instance:

“For you. You’ll soon. You’ll give her name. In the stitches of her skin she’ll wear your say. Mammy me? Yes you. Bounce the bed, I’d say. I’d say that’s what you did. Then lay you down. They cut you round. Wait hour and day.”

I even tried reading this in a cracked version of an Irish accent and I STILL didn’t get it.

This book was definitely more style over substance. The author’s use of language here was almost gimmicky to me, a mask for the fact that the character wasn’t very interesting and there wasn’t much of a story to tell.

I don’t understand how this book is getting rave reviews. Am I the only one shouting that the Emperor has no clothes here?