Recently, I was up one night Google-ing (c’mon, you do it too) and I saw this article on ThoughtCatalog on common place books. “A common place book,” the article writes, is “a central resource or depository for ideas, quotes, anecdotes, observations and information you come across during your life and didactic pursuits. The purpose of the book is to record and organize these gems for later use in your life, in your business, in your writing, speaking or whatever it is that you do.”

Wow. Because…well, I have been doing this for years. Even in middle school I can remember doing this: coping passages of books I liked, poems, and writing down other things I liked. Now, it actually has a name. I never called my collection of antedotes a ‘common place book.’ Matter of fact, I never called it anything, just my notebook. Inside this notebook I’d always hand write song lyrics, quotes, lists, general observations, notes, and attempts at poetry. It is not a journal/diary and I’ve never used it for that purpose–my journal is a separate thing altogether and kept in another notebook. I’ve always used moleskines for common placing because they’re inconspicuous (no one is looking over your shoulder while you’re writing in a small black book), sleek, and easily portable. The paper is high quality and doesn’t bleed through with gel pens, which is what I prefer to write with.

Down below I will show you pics of my current common place book. However, I want to make some distinctions here between a common place book and a journal/diary, because in my opinion they are not one in the same.

A couple of shots of my current common place book. I tried to pick some of my neater pages, because my cursive can be hard to read while I’m in the “moment”:

Some notes I was taking on sci-fi genres.

A list of animal collective nouns. Why did I write this? I’m not sure.

In this case, whole quotes copied out of a novel I was reading. This was Ethan Hawke’s “Ash Wednesday.” A very good book, btw. 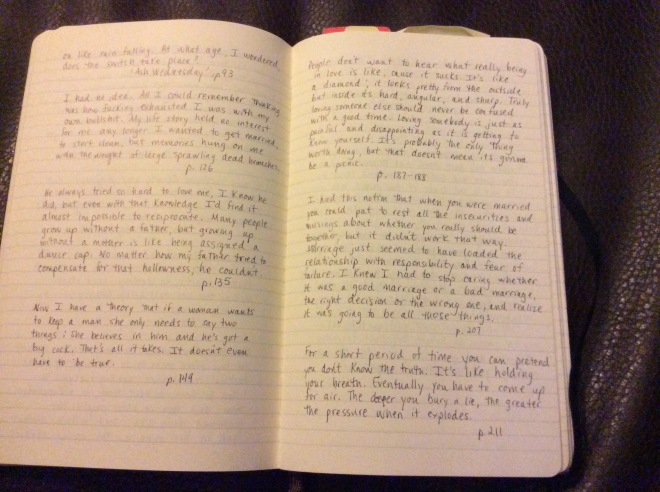 A list of albums I like for a music Tumblr I was thinking of doing. It never came to fruition.

Some Radiohead lyrics I was too lazy to write, so I printed them out, cut and pasted them. Yup. 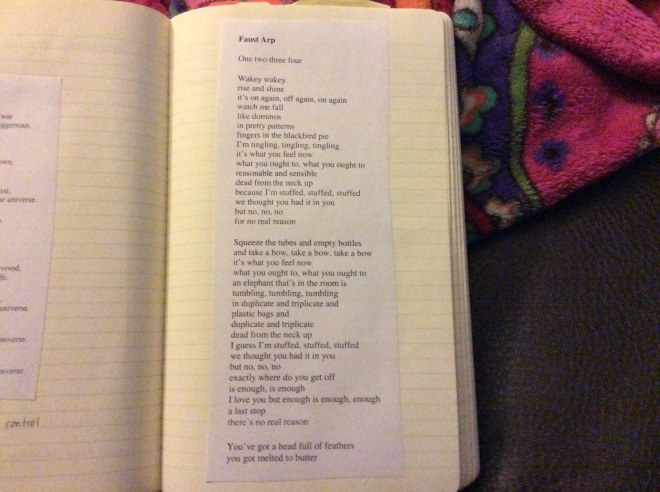 Does anyone else out there have a common place book? Inquiring minds here would like to know…

[Note: It occurred to me just now that a Pinterest board is kinda the electronic equivalent of a common place book. I whole-heartedly agree with this.]

From an essay by Ian Brown on keeping a notebook, as published in the Globe and Mail:

“It’s a neurotic habit, a personal notebook. It can work as a diary, but it’s not intended for publication…A diary is an accounting. A notebook, by contrast, is to record details that reach out as you pass, for reasons not immediately apparent. A notebook is full of moments from days that have yet to become something. “Keepers of private notebooks are a different breed altogether,” Joan Didion wrote in a famous essay about notebooks, “lonely and resistant rearrangers of things, anxious malcontents, children afflicted apparently at birth with some presentiment of loss.”

I have always kept some kind of notebook from the time I began writing, when I was 10 or 11. All kinds of stuff would go in there, homework assignments, what I wore for school, funny observations about people I was too shy to discuss with anyone (“she wore that sweater yesterday, her hair smells like cheese”), diary entries, ideas for stories. I can’t find a single trace of these notebooks today, but I can tell you that to this day, my notebooking habit endures. There is my trusty red moleskine notebook/planner that I write EVERYTHING in (appointments, meetings, interesting things I watch on TV, books I’d like to read, what bills to pay and when) and my plain brown, Staples composition book that functions more as a diary. Here I do not edit, and write completely without censoring myself. I never intend to publish what is in my diary because I’ve always looked upon it as a playground for exploration, a way to process certain events and understand them. Anyone who is serious about the craft should probably be writing in a notebook, it’s the best (and cheapest) therapies you’ll find.