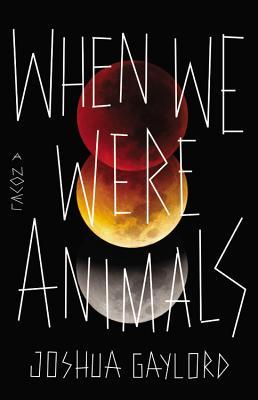 Review for “When We Were Animals” by Joshua Gaylord (2015)

Hmm…this is a very weird book. Weird in a good way, though, and well worth the read.

The story takes place in a small Midwestern town named Polikwakanda, where teenagers run wild every full moon for three days while their parents and the rest of the town’s citizens lock themselves safely inside their homes. This occurrence, called “breaching,” lasts for three straight nights during each full moon. The town’s teenagers leave their homes and fight, vandalize property, run in the woods, have sex orgies, etc. The reason why it only happens in this town is never explained (though an ancient Native American curse is hinted at), but we come to understand that “breaching” is a sort of rite of passage for the town’s citizens that begins at the onset of puberty.

Lumen, the main character, is a teenage girl living with her father (her mother died when she was an infant). She believes she is morally good, and that she will not breach. She is intelligent and an awkward late bloomer, ostracized from her peers as she watches all of her classmates begin to breach around her. Pretty soon, she finds herself escaping out of her bedroom window during full moons and doing the naughty, forbidden things she believes she will never do.

Early on in the novel we learn that Lumen is now Ann Borden, a middle aged woman who is married with a young son. The majority of this story is told in flashbacks, with Lumen narrating her story from the present day. As an adult and as a teenager she feels like an outsider, still coming to terms with the events of her past.

I read a review on GoodReads that described this book “another version of Twilight,” and I completely disagree–this is nothing of the sort. There is a romance here, but it’s not the centerpiece of the novel. Although the main character is a teenager through most of the book, I would not describe this as YA, this definitely an adult novel. There are supernatural elements here that could place it in the werewolf/vampire/horror genre, so I’ll leave it there.

This is ultimately a coming of age story, with deep philosophical questions. How do we reconcile our most primal urges (sex and the desire to do violence) with rational ‘human’ behavior? At what point do we lose the ‘mask’ we construct for ourselves and be who nature intended us to be? This book explores those questions and several more in a very thorough and insightful manner. There’s a lot of darkness here and the main character’s very name (Lumen) means ‘light.’ The Freudian implications of this book are fascinating and so far from the banality of “Twilight” that to compare the two is complete foolishness.

Please read this book. You won’t be sorry.