The semester is kicking my arse. I’ve been reading though. I’ll be back with my feature on Monday. Till then… 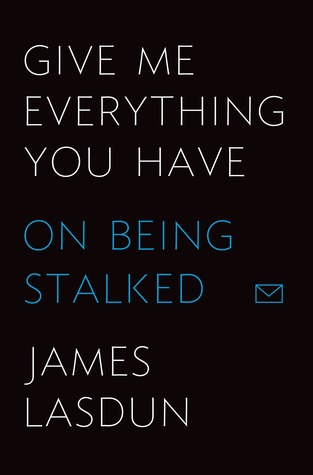 Review for “Give Me Everything You Have: On Being Stalked” by James Lasdun (2013)

This book is so bad it’s laughable.

Being the curious person I am, the title drew me in. Stalking has always been a subject that’s received considerable attention, so I read it.

Man, I am SORRY I read this.

It’s supposed to be a true story. Sadly, I don’t believe much of it.

Mr. Lasdun is a creative writing professor at some college in NYC when he meets Nasreen, an Iranian student in his class who he believes shows talent in her writing. She asks him to look over her manuscript, and after several refusals, he eventually agrees to, as well as introduce her to his agent. Around this time they begin (in his words, of course) a “friendly” correspondence through email. At some point, Mr. Lasdun feels their conversation has gone too far and he reminds her he is happily married. This is the point where, according to him, all hell breaks loose. Nasreen begins a complicated campaign of online harassment, spreading accusations of plagiarism and rape among his colleagues, threatening him and his family, making anti-Semitic statements, etc.

But all that’s not my beef with this book. Although I do not feel like Lasdun is being completely honest (I do believe a little more happened between him and this student that he is not telling us), that’s not why this book got 1 star from me. You see, I don’t care about the drama. On page 30 I wondered aloud why this so-called ‘intelligent’ man didn’t just change his email and move the hell on with his life. It’s the execution of the story that fails miserably here. Mr. Lasdun tells you the stalking story, along with pages upon pages on extraneous information: musings on architecture, the writings of D.H. Lawrence, a 37 page train ride that had ZERO to do with the story. Oh God, and the last 55 pages of this had almost nothing to do with anything at all, the content is so far afield it’s almost like another book entirely.

I almost DNF’d this sucker had it not been for my extraordinary power of skimming to get to the end.

Don’t read this book. If you do decide to take the plunge, for God’s sake, don’t buy it. Get it from the library. Stand in Barnes and Noble and sip a latte and skim it. Read parts 1 and 3, skip 2 and 4. You’ll have the whole story right there. Guaranteed.

One thought on “Review: Give Me Everything You Have: On Being Stalked”