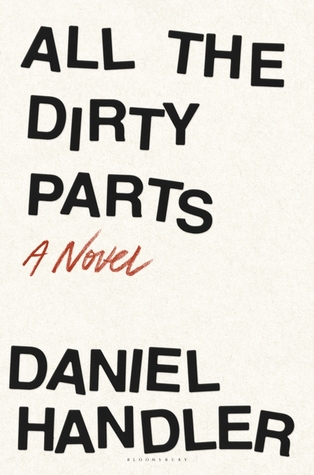 Well, this is umm, interesting…

Daniel Handler’s (aka Lemony Snicket) latest novel is a look inside the mind of Cole, a teenage boy with one of the most intense obsessions with sex in the history of literature. At the beginning of the novel Cole tells us that so far he’s had sex with 11 girls and has even developed quite a reputation at his school for sleeping around. He also watches porn endlessly, masturbates, trades dirty stories with his friend Alec. Things continue in much of the same manner for the first 50-60 pages until Cole eventually meets a girl he likes, whose sexual appetite appear to closely match his. I won’t give the rest away, other than to say that I found this book really disappointing.

Of the 134 pages of this book, there is no blank space that does not focus on the character’s thoughts of sex or detail some aspect of him engaging in it. While the highly sexualized subject matter didn’t really offend me, the lack of a plot did. This novel is a stream-of-conscious, helter skelter jumble of thoughts that seemingly go nowhere. There is some vague idea of a ‘lesson’ that the main character learns in the end, though it could have been executed much, much better. In the meantime there’s nothing here that really keeps you going, other than a need to finish.

I also take issue with the description of this book by the publisher as ‘an exciting novel that looks honestly at the erotic impulses of an all too typical young man.’ OMG…there is nothing about Cole’s all consuming obsession with sex here that suggests that his behavior is ‘typical’ of a teenage boy. To me, he came off as a raging sex addict in need of some serious psychological help. While Cole’s actions and thoughts may indeed be normal teenage impulse and logic, the ways in which he used sex to act on those his emotions was not, in my opinion, ‘typical.’

This certainly is not a YA book, and some adults may question why they are reading such a pornographically detailed account of the life of a teenage boy. The whole time I’m reading this I’m wondering who the real audience of this book is. Not that it matters so much, but just a consideration. Hmm.