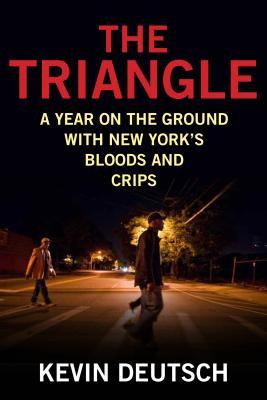 Good Lord this book sucks…where do I start?

“The Triangle” is a reporter’s ‘first hand’ account of a year in the lives of Crips and Bloods gang members in the community of Hempstead, Long Island, NY. Both gangs, long associated with the urban center of NYC, have now moved out into the suburbs. Priced out of their former boroughs through gentrification, the suburbs of Long Island and its surrounding towns are now the setting of murders and gang warfare, as well as open air drug markets run by both gangs.

Much of this book takes place during a gang war between the two sets. It’s not a pretty picture. There are accounts of beatings, rapes, and murders on both sides, reported with the same mind-numbing, casual tone as one would describe a routine activity such as making a sandwich. The Crips strike the Bloods by gunning down one of their high ranking members, Bloods then retaliate by kidnapping and raping a Crip female associate. The circle repeats itself over and over as each gang goes back and forth, back and forth. By page 75, I was completely annoyed with this.

Which brings me to the major problem here: the tone of this book. There’s nothing here. For narrative-style nonfiction to be effective, there has to be emotion conveyed, somehow, somewhere, people have to live outside the page. Otherwise, reading about them is just boring, pointless facts. Ladies and gentlemen: this book is just boring pointless facts. There’s no emotional investment in this story by the author or by me in reading it. Here, the main players sling drugs, smoke weed, terrorize their community, then die in a hail of bullets. An awful lot. At no point did I feel any emotion over this, just irritated at the voyeuristic nature of the violence.

Another problem: much of the action of this book takes place through dialogue. In a note at the end, the author mentions that only about 40-50% of the events were witnessed by him first hand. This means that the majority of this book’s events were constructed or inferred by the author, or solely based on the verbal accounts of the subjects (who, even the author admits, had a tendency to lie or embellish details to bolster their reputation on the street). How much, then, of this story is really true? A quick Google search of the author’s name turns up several accusations of suspicious journalism practices for work he did on a later book. For all we know, this book could be mostly fiction too, passed off as nonfiction with the use of fake/nonexistent sources.

I don’t recommend this book at all. If you really want in-depth, emotionally gripping stories of gang related violence and the urban drug culture beyond just play-by-play tales of violence, I would check out the work of David Simon. He’s written “Homicide: Life on the Streets,” “The Corner,” and, of course HBO’s show “The Wire.” Much better writing too. Check those out. Not this.