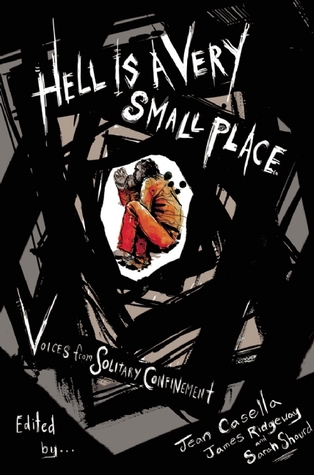 As an educator I’ve always been interested in the criminal justice system–how so many people get caught up it, how they survive there, and of course, how they can stay out. This book is a collection of essays about the subject of solitary confinement, otherwise known as administrative segregation (ad segs), special housing units (SHUs), and various other names depending on the state and institution responsible for their use. Regardless it’s all the same–23 or 24 hours a day in a small cell alone, often with no books, tv or radios, communication with outside people, papers to write with, or any form of stimulation other than the concrete walls. It is such a mind numbing and soul crushing experience that the UN has declared it torture and countless doctors and mental health experts have denounced its use. Yet, it continues on an unprecedented level in our nation’s jails and prisons.

There’s a really good historical perspective on solitary confinement in the U.S. in the beginning of the book. Solitary confinement was used widely in the 1800’s and then abandoned due to its terrifying psychological effects. In the 1970’s, the practice was picked up again, mostly due to prison overcrowding, lack of educational and training programs, higher levels of violence, etc. The essays in this volume are particularly powerful, all of them either from people currently in solitary who have been there for long periods of time (20 years or more) or from people who are now free individuals, living with the psychological effects of this practice. The last section is a series of articles by experts, all of which condemn the practice and offer solutions.

It is easy to dismiss this book and the issues it brings up with the Trump-era view that criminals are terrible people who belong in prison. It’s even easier to say that these terrible people deserve punishment on top of the punishment they’ve already received for not following the rules. This is simply not true. Many of the people who are sent to solitary are sent there for non-violent offenses, sometimes for something as simple as “possessing too many postage stamps,” “associating with known gang members” (California), or in New York state, for “wearing shower shoes outside of the shower” or “using profanity.” Time in the SHU is usually given by prison officials and the prisoner often has no right to a defense. And the punishments can be as long as the officials deem necessary–weeks, months, even years. Or, in some cases, life.

I definitely recommend this book. Despite what we think of the people in the correctional system, the fact remains that many of these “terrible” people will get out–someday. They will live next to us and share our social spaces. The question becomes one of whether we would prefer someone who’s been rehabilitated with kindness or someone who’s been locked in a cage like an animal. I personally prefer the former.

This is a great book. Read it!