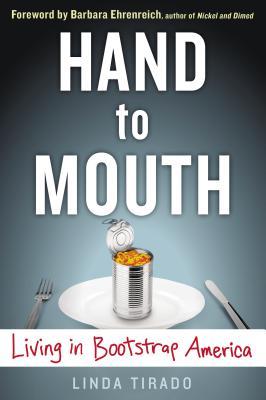 Ladies and gentlemen: this is a long review. I also have a potty mouth. Don’t say I didn’t warn you.

I wanted to read this book all the way through but I just couldn’t. I did finish it (thank God it’s short), but skimmed through most of it. I’ve never read a book in which the author’s tone is so negative, angry to the point where the arguments they are attempting to make are almost laughable because its obvious that they’re affected by their emotions. I got this over as quickly as possible.

Linda Tirado was an average “poor” person on the internet one evening when she came across a message board where a poster asked why poor people make bad choices (smoking, drinking, having children they cannot afford). She responded to the poster in a strongly-worded diatribe on why life is hard for poor people. Her post went viral and apparently she started a GoFundMe account and raised $60k. She promptly went on a Vegas vacation got herself a book deal.

In “Hand to Mouth,” Tirado takes us on a kind of “tour” of what it means to be poor. In the introduction, she breaks down poverty as “when a quarter is a miracle,” poor as “when a dollar is a miracle,” working class as “being broke, but in a place that’s not broke down,” and “middle class” as “being able to own some toys and to live in a nice place–no leased furniture.” “Rich,” according to Tirado, is anything above this.

From this page forward I knew that this individual was completely insane, but I decided to give her a chance.

Anyway, I call BS on this book for the following reasons:

— Despite the “poor-middle class-working class-poverty” distinction Tirado makes in the intro, she spends the entire book only talking about two types of people–rich and poor. If she’s just going to speak in a dichotomy, then her definitions are meaningless, because by doing so everyone who is not rich is, in her own view, “poor.” In applying the term “poor” to such a large swath of the population, she falsely attributes the same attitudes she has to everyone who is not rich. This is a classic logical fallacy. It is also simply not true, and it permeates the whole book.

— Tirado was going to college, but admits that she dropped out because, financially, she “didn’t think it would amount to anything.” While I’m not one of those snooty folk who believe college is for everyone (it’s not), I am curious to why the author did this with no apparent backup plan for a career. She also does not bother to learn a marketable trade or skill (i.e., paralegal, nursing, auto mechanic) in the place of college. Instead, after dropping out, she complains to us about working a series of low paying jobs that she hates. With no advanced degree or training, how then, can she expect better than low-paying work? Does she seriously expect, by stroke of luck, to land a job making $25 an hour despite not having demonstrated any kind of skill to do it? I’m a bit confused with her logic here.

— Tirado also admits that she was mediocre at several of the jobs she’s held, even screaming at her boss once because she was stressed and has “anger issues.” Putting anger issues aside, I am not sure what “being poor” has to do with simply being a bad employee. The “poverty” she’s referring to here seems to be one of the spirit.

— The author also attributes every unfortunate thing in her life to “poor” financial circumstances. Her lawn is shitty because she can’t pay someone to fix it. There’s tires in her grass because she can’t pay someone to haul them away. She can’t land a nice secretarial job because she’s poor and not pretty. She doesn’t want to open a bank account because they take a monthly fee, and she’s poor. There’s roaches at her house because, well, she’s poor. At some point you wonder where a sense of personal responsibility sets in, or the strength and amazing resilience of people like my grandparents (who, trust me, were dirt poor, Black, and living on a cotton field in the Mississippi Delta) and still managed to keep a clean house, a nice lawn, arrive on time to maintain stable jobs, and raise 10 law-abiding children in the process. Yes poor people are poor, but they still thrive. They find meaning in their lives, they get out of bed in the morning and yes, they manage to keep up a decent looking lawn. Fuck that.

— Makes no point at all about race and/or privilege. Despite how “poor” Tirado claims to be, her being White still gives her a privileged existence over many minorities who could write this same story. At least she doesn’t live in the projects, or live in a violent, gang-infested neighborhood. At least she speaks English. At least she is a documented U.S. citizen, and doesn’t have to deal with the fear of being deported every time she leaves her house. At least her and her husband don’t have a juvenile criminal record which would prevent gainful employment. At least she doesn’t have a physical disability or a severe mental illness that completely prevents her employment. I could go on and on, yet she mentions nothing of the fact that even she has it a lot better than some because of the systemic racism and discrimination that privileges Whites and able-bodied individuals over minorities.

Now Tirado does make some points that I agree with:
— Yes, universal health care is needed.
— Yes, the myth of meritocracy (the idea that anyone can be rich, all they have to do is try hard; as well as the idea that if one is not rich, they did not try hard enough) is very real and is still very much bullshit.
— No, we shouldn’t judge poor people’s decisions to have children. We may not like the fact that a poor woman has more kids than we’d prefer, but that’s not my decision to make.
— I also agree that poor people aren’t the only ones who get hand outs from the government (bail outs and corporate tax cuts are the wealthy person’s welfare).
— No, rich people should not look down upon people in service industries (cooks, washers, retail workers, food service).

But this book is simply too angry, too simplistic, and far too emotional in its tone to be taken seriously. I don’t advise reading it.

4 thoughts on “Review: Hand to Mouth: Living in Bootstrap America”