Pardon my absence, I’ve been ill for a few weeks. Part of this is neglecting my diet and habits toward self care, the other part of that is a genetic component to my life that I need to be more cognizant of. If you’ve never had large kidney stones I hope that you never get them (or have to have surgery to remove them), and that you take loving care of your kidneys and your health in general.

The good news? I did a lot of reading while I was at home recovering.

Ok. On to my review… 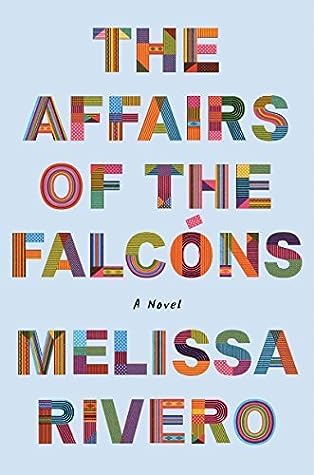 This book was so-so. I liked the premise of it, the execution, however, not so much.

“The Affairs of the Falcons” is the story of Anita Falcon, an undocumented immigrant from Peru. She lives with her husband’s cousin’s family in Queens in a cramped apartment. Anita is married to Lucho, has two young children, and works as a seamstress in a factory. Her husband drives a cab, but when the story begins, we learn that he has lost this job due to his undocumented status.

As you can imagine, money is very tight in this family. Most of this book revolves around the subject of money–getting it, losing it, and borrowing it from others to pay back the loan sharks who smuggled the family into America. Due to her status as undocumented there is no access to banks, and Falcons are always limited in terms of what kinds of jobs they can get. Housing is also an issue, internal conflicts in the home push the Falcons’ welcome with Lucho’s family to the limit. Also depicted here are the ways in which class and race play into the lives of a Latinx family (Anita is rural and indigenous, Lucho is lighter skinned, well educated, and from Lima). Lucho’s family remind Anita often of her despised, lower status among them.

Despite the external pressures, Anita is not a weak character, though she does makes questionable choices throughout the book. I don’t necessarily have a problem with this, my reason for the 3 stars is because I found the book to be less than compelling. There are tons of books out there on the immigrant experience, and I don’t really feel this book will stand out much within that group. There is not much that happens here that we haven’t read before, especially if you are familiar with this sub-genre of books.

I definitely recommend reading this book though. I’d also be open to reading more from this author in the future.