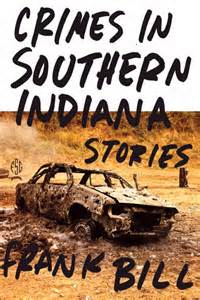 Review for Frank Bill’s “Crimes in Southern Indiana”
Rating: 4 out of 5 stars

This book is a bit of a guilty pleasure, because under normal circumstances I wouldn’t be caught dead reading a book with characters engaging in behavior this despicable. I liked this book for exactly the reasons I shouldn’t, because I figure every now and then it’s good for a serious reader like myself to treat myself to a bloodbath by ne’er do-wells.

This book is pretty much a nastier version of “Breaking Bad” in literary form–with people being buried alive, chopped up, beaten up, and fucked up beyond all recognition in almost every story. Frank Bill takes you to hell and back in a bullet ridden pickup truck and to a thousand other nasty places in between. In this universe there is murder, crooked cops, revenge, dogfighting, drugs, and guns (lots and lots and lots of guns) and not only are they the rule, they are the law. You want to feel bad for many of these people but you don’t, the protagonist in one story often shows up again antagonistically in another, as if they’ve finally drawn fate’s hand for their misdeeds.

Honestly, I liked this book. But there were many stories I wished were longer because they felt so rushed. We never really get to know the man who’s head gets blown off during a meth raid and I wish we did. I really wish we did, because it would have given this story even more power.