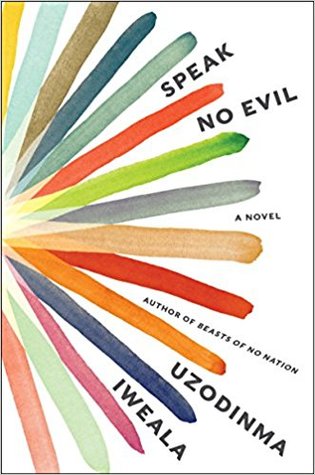 Nah, I didn’t like this book. Thankfully it’s a short one (about 200 pages), so I was able to muster the courage to get through it quickly without chalking this one up as a DNF.

“Speak No Evil” is the story of Niru, the first generation, American-born son of conservative, upper class Nigerian parents. Although he lives a life of material wealth, he cannot escape the realities that cause him considerable distress: impossibly high standards set by a successful older brother, police harassment due to driving while Black, the racist microaggressions by White classmates at the prep school he attends. The one person he relates to is Meredith, a classmate to whom he confesses that he is gay. His father discovers his secret and, after a violent confrontation, takes his son to Nigeria to visit a special preacher to “pray the gay” out of him. Niru returns to school but his spirit is even more troubled, restless, and confused. He is a shadow of his former self.

The story doesn’t end there. Niru goes continues struggling with his sexuality before meeting a violent end, the circumstances of which did not seem to go with the premise of the book. It is obvious that the author wanted to prove a point about race with Niru’s demise, but I dunno…this kind of “switch” seemed uncalled for. There is also a shift in narrative–when Niru stops talking, Meredith steps in and ends the book. I didn’t like this either. I think he could have stayed with the original voice. The inclusion of Meredith’s voice seemed rather sloppy to me, kinda like he originally drafted two novels and put them together in the same book.

Strangely, I also found this book terribly hard to read. I shouldn’t have, though. Iweala writes this book in the same way he did his last, “Beasts of No Nation.” There is no speech punctuation in that book either, whole conversations appear within huge blocks of text. Though the lack of punctuation didn’t bother me in BoNN, for some reason, it bothered me immensely here. Perhaps it is because there was more description and internal thoughts with “Beasts of No Nation,” less dialogue. I don’t know. Hmmm.

I won’t give this book one star, I respect Iweala greatly as a writer. I just don’t think this particular book was my cup of tea.