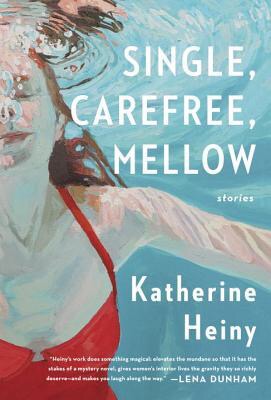 “Single, Carefree, Mellow” to describe this book is a hell of a misnomer, because not one of the characters in this collection of eleven short stories was single. All of Heiny’s characters are upper middle class, educated, young white women working in a writerly kind of job and married to or in a committed relationship to a nice, clueless guy who works in a tech field. Every single story (yes, every. single. one!) included a main character caught up in some form or another of adultery, usually with a slightly older man who also works in a writerly occupation. It was almost as if the author was using a formula here: introduce characters, insert some humorous descriptions, bleep bleep bloop…then onto the coup de grâce of the main character and her running partner going at it like rabbits in the backseat of a car. Yes. Really.

I can understand that a book has a common theme, but this was ridiculous. I’ve never read a short story collection in which the stories were so blandly repetitive, the characters so obnoxiously cliche. The women here were so indistinguishable from one another that it didn’t matter that Heiny used the second person narrative in several selections, or that the same character appeared in three different stories here in three different stages of her life. You don’t remember the characters’ names because they were so predictable and generic—the same voice, same character type. And since they’re all screwing their bosses or the dude they met on the Internet anyway, their affair part of the story becomes mindless, so beside the point. Like background noise, you ignore it. You move on, you don’t care.

Also weird was that no one in this book, not one single person, appeared to have any moral objections to all of this affair-having. Not that every person is a born again Bible thumper, but I found the total lack of empathy in each story strange, to the point where the characters were completely unrealistic. Not one of the significant others/husbands here seemed to be vaguely suspicious of their wife or girlfriend, and no one was ever discovered in their indiscretions. And always, after said affair was over, the protagonist seemed to go on with their daily lives as normal. Really?! Like, I had no idea that getting your rocks off with a guy you met on a plane while your husband’s on a bicycling trip was that simple. Wowzers!

Is infidelity among women this rampant in our society? After reading this book, if I wasn’t careful, I would believe so. However, I honestly believe that women are smarter than what Heiny portrays them as. The strangest part about it was that I actually did enjoy Heiny’s writing, she employs a fair amount of dark humor, which was a plus for me. There was also a very touching scene in one of the stories in which the character loses her dog after an illness, which left me kinda sore because this happened to me about three years ago (RIP Zoe). But that was the only scene that connected with me, it still wasn’t enough to save this crappy mess of a book. Glad I didn’t purchase this, thank God for libraries…