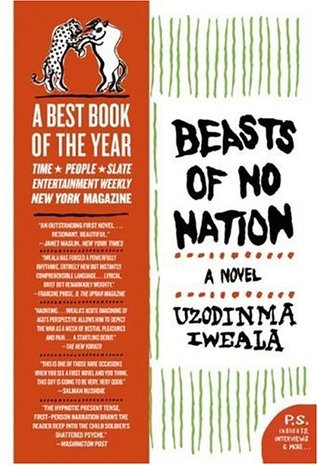 Review for “Beasts of No Nation” by Uzodinma Iweala (2006)

This is a story that hits you like a grenade. I watched the movie on Netflix and was blown away by the actors’ performances, I cried so much watching it that I knew that I HAD to have this book. It’s short (less than 150 pages) but it took me over a week to read it. The events that are described within it are, in no uncertain terms, some of the most horrific experiences I’ve ever read about. The events are achingly close to the movie adaptation, but the book’s descriptions of the violence was a lot more brutal. The narration was somewhat hard to understand at first because the main character speaks a special kind of “broken” English that took some getting used to. By the third page, however, the character began to make perfect sense, with a cadence that made his words abundantly clear.

This is not a book for the weak-hearted. There were times during the week when I was reading this when I had to put it down, back away, get some air (literally), and come back to it later. It is heartbreaking, tragic, and terrifyingly real. It is the story of Agu, a child in an unnamed African country that is currently in the grips of a civil war. We are never told exactly how old he is, though some clues point to the fact that he is not yet a teenager–perhaps 12, or maybe 13. His mother and sister are taken away to safety in the beginning, he never sees them again. He watches his father murdered shortly thereafter. He hides in the wilderness until he is recruited (well, take that back: forced) to join a rebel army and fight against the insurgency. At first he is quite disgusted by the violence he witnesses, but after a while, he describes taking part in the rapes, murders, and act of burning villages with the same nonchalance as any other enjoyable childhood activity he takes part in.

Agu is morally conflicted: throughout the novel he constantly tells himself (and you, the reader) that he is a good boy, with some degree of moral sense against the acts he takes part in. He tries over and over again to convince his conscience that the violent acts that he is forced to commit are good and proper. You get angry with Agu (a lot, actually) throughout the story, but you remember that he is just a child, a pawn used by evil men. We hate that he does bad things, but what choice does he have? It is clearly a kill or be killed situation. The end does bring some promise of a future for Agu, but you still fear for him as you wonder what kind of effect these experiences will have on his adult life.

So, with that said, why am I rating this five stars? Well, because this is a story that NEEDS to be told. As Americans we complain about bad traffic and too much goat cheese in our salads, yet hardly half a world away children are forced to become a part of brutal acts that are beyond our wildest imaginations. It has become way too easy to turn on the news and hear about ‘those people,’ to donate money and shake our heads in pity and rest assured in our first world lives that these types of atrocities will never happen to us. We view childhood as a time of innocence, but in the wrong hands, we forget that it is actually pretty easy to turn a child into an efficient killing machine.

So, needless to say, I recommend this book. Agu is a special character that stays with you for a long time. Hopefully he will spur you to change your outlook on the world, or at least to learn count your blessings.

One thought on “Review: Beasts of No Nation”