Ok, so I showed you my fresh-in-the-mail copy of this book last week. Here’s the review… 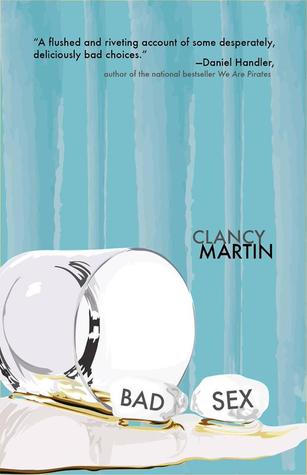 Hmm, I read this one in a few hours last week. First impression after finishing: a familiar, but a very dark story.

Bad Sex is about a wealthy woman named Brett who breaks her sobriety and begins to drink again after she begins an affair with her husband’s banker. Eduard (the guy she’s having an affair with) doesn’t necessarily encourage Brett to drink, but he doesn’t discourage it either. Their sexual encounters are very detailed and often include really violent sex (some scenes were quite appalling–I’m surprised no one called the cops). Her husband discovers the affair and kicks her out of their home, and Brett continues with Eduard in a downward spiral of black outs, drinking, and ridiculous behavior.

The writing here is very minimal and told in short chapters. It reads more like a collection of vignettes than a novel, almost as if you are looking at a photo album of an alcoholic’s life. Brett is a highly unlikeable character–she’s rude, obnoxious, and extremely narcissistic. At times I found myself literally rolling my eyes and thinking: Really, bitch? The choice to make this book short was a wise one, as I don’t think I could have put up with reading about any more of Brett’s antics after 182 pages.

Despite everything, I just don’t think this was the book for me. The writing is good but I was literally counting down the pages until it was over, it was so disturbingly uncomfortable I just wanted it to be finished.

[NOTE: I received a publisher’s copy of this book from Tyrant Books in exchange for an honest review.]