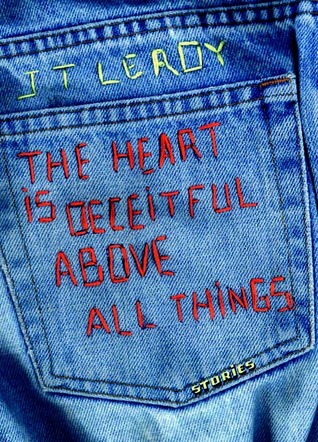 I’ve decided that I don’t care about the controversy or authorship ‘hoax’ that surrounds this book. I treated it as fiction from the start, because I strongly doubt the intelligence of anyone who would really think that a 16-year-old wrote this book. If you want to read about how a smart middle-aged woman fooled a bunch of dumb hipsters with her supposed ‘autobiography’, a quick Google search of “J.T. Leroy” will fill you in on all the details. It is an interesting story, though. Shit, even I have to admit that I LOL’d…

Anywho, “The Heart is Deceitful Above All Things” is a set of interconnected short stories that follow the life of a young boy named Jeremiah, or in this case, J.T. Leroy. In the first few pages, Jeremiah is stolen by his drug addicted, prostitute teenage mother, Sarah, from his foster parents’ custody. The majority of the book follows young Jeremiah’s life with Sarah (on the streets, traveling the country as a lot lizard) and without her, where he is consistently abused by evil people in the most evil of ways. He depends on Sarah even as he is abandoned by her time and time again, leaving him with a desperate need to be loved by anyone, no matter the cost.

With that being said, I don’t know if I was quite ready for the sheer volume of controversial subject matter here. As a book reviewer, I pride myself on having reading nerves of steel: fearless, unafraid, and unbothered by the most taboo of subjects. Little did I know that I would eat my words with this novel, because this one puts ‘disturbing’ in a completely different category altogether.

I won’t spill all the beans here but I will say that in terms of content this book is pretty much a snuff film on paper. There are graphic, detailed descriptions of physical abuse, sexual abuse, verbal abuse, incest, scatological references–you name it, it’s there. There is nothing at all enjoyable here in terms of descriptions, settings, or characters. The horror, the abuse, and the bleakness of Leroy’s book is constant and unrelenting. There are some traces of great writing here, but it’s diminished by the author’s love of shock value. Therefore, I didn’t care for this at all.

I wouldn’t recommend this book unless you have a super-strong tolerance for gore and the darkest parts of human nature.

In the end, thank God this was a short read.

Thank God this book was fake.