Remember when I said that I’ll never review nonfiction? Well, I kinda lied. Not in a bad way, though. I read NF all the time, I just prefer not to write about it here.

This book is different. I had to read it for a class I’m taking on social deviance, so therefore the ‘review’ was already there. I had to type it last night, so I’m sharing it here. 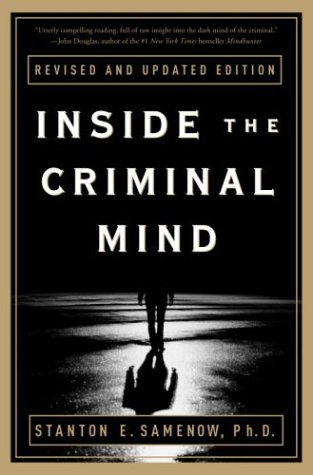 Review for ‘Inside the Criminal Mind’ by Dr. Stanton Samenow (2004)

I read this for a doctoral level class I’m taking in Social Deviance. I wish I hadn’t though. In this book, Dr. Samenow sets out to answer the age-old question of why criminals commit crimes and spends 50,000 words (or how ever long this book is) answering, simply, “well, because they choose to.”

Don’t get me wrong. I am not the one to coddle or play hug-a-thug either with the big bad wolves of society. I did agree with some of the points he makes here. Samenow says that criminals are usually narcissistic, selfish people who feel entitled to the finer things in life (agreed) and feel that they shouldn’t have to work for them (agreed). Their need for power and validation feeds into their desire to victimize others in whatever way they can–fraud, sexual assault, robbery, etc (agreed). Work places, schools, family units, and other social institutions are where they hone their con game, and if and when they’re caught and locked up, they’ll hopefully change their thinking (agree). Samenow is adamant that prisons, rehabs, reading programs, and career counseling will not change the criminal because of how he thinks. He scoffs at sociologists who point to indicators such as poor schooling, drug abuse, lack of job opportunities, mental illness, poverty, and other factors as the reasons why people turn to crime.

And I understand this, I really do. But how can Dr. Samenow completely dismiss these sociological viewpoints? Most of the case studies of criminals he gives in this book are of middle class men he has interviewed–men who came from the so-called ‘normal’ two-parent homes, whose folks more than likely had the resources for therapy, and, who despite all of their efforts, still went on to choose a life of crime regardless. One cannot help but to notice the lack of socioeconomic diversity in this book, which, I’m sad to report, makes this book terribly biased. While I am not saying that all poor people are criminals (nor are all criminals poor), one cannot deny the effects of poverty and class stratification on a large number of the people in our criminal justice system. Poverty itself does not cause crime, but it definitely leads to the illusion that illegal means are necessary to achieve prosperity.

Another jarring problem with this book is how Dr. Samenow talks about criminals as one homogeneous group. We know that a woman who is addicted to crack cocaine and sells her body for profit and a Jeffrey Dahmer-like sex predator/murderer are both criminals according to the law, but are they really in the same category of deviance? According to Dr. Samenow, there isn’t much of a difference between a weekend ecstasy user and John Wayne Gacy. He also disregards ‘addiction as a disease’ pathology and with it, pretty much everything that’s been written in the field of human psychology for the past 25 years. As a psychologist, you would think he wants to understand what really drives people to do what they do beyond the most obvious, the motivator of choice.

I got almost zero information from this book. I imagine that this book is hot with prosecutors and other right-wingers who want to ‘get tough’ on crime by locking up people doing everything from robbing a bank to stealing a chicken. It doesn’t make it correct though. Not in the least.

One thought on “Review: Inside the Criminal Mind”