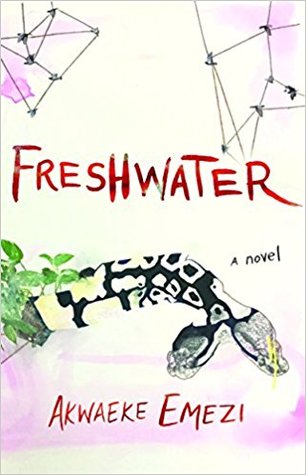 I have no better way to start this review, so I’ll say it again: Wow.

Reading a novel like “Freshwater” was a completely new experience for me. To step into its pages was to venture into a beautifully strange, dark world, the realm of something amazing: ancient gods, beauty, life, death. “Freshwater” is also the world of a young woman’s troubled mind.

Ada, whose life is the focus of the story, is just one of the characters here. She is conjured through her father’s prayers and born into a middle-class Nigerian family with “one foot on the other side.” Early on, you come to realize that the ‘side’ is the spiritual realm and the ‘foot’ that the author is referring to is a pathway through which primordial gods freely enter and inhabit Ada’s physical body. Much of the story is narrated by these gods, who are birthed and rebirthed several times and call themselves “we” throughout the novel. Also present in Ada’s body are two distinct spirits: Asughara and Saint Vincent, the former being the more powerful of the two. As Ada grows older, Asughara begins to control more of her actions and her voice fades into the background. Very little of the book is narrated by Ada, she lives instead through a smaller, fractured self.

The spirits that inhabit Ada’s body desire to pass back over to the other side–the only limitation being that they are attached to Ada’s physical self. As the book progresses, Asughara, Saint Vincent, and the “we” become protectors to Ada, taking over when the current situation and/or the people in her life are too much for her to handle. They also push her to dangerous extremes. I loved the way in which this book completely detaches you from what you think you know about mental illness and cleverly uses spirituality to frame the narrative instead. Through Ada’s ‘spirits’ multiple themes are explored: racism, addiction, self-mutilation, gender nonconformity, and religion, among others.

There is a brutalness in this writing that comes through in the multi-layered narration the author has chosen for this book. In the end, this is a book about coming into one’s own voice, despite what that voice says and how many lives it has lead in the past.

This is not light reading, folks. Come to this novel prepared to underline passages, expand your mind, and think outside of the box. When I arrived at the end of this book, I realized that there was nothing I had previously read that I could rightfully compare this to. “Freshwater” stands on its own as a creative work that is uniquely beautiful. It fights labels and categories, it truly stands in a genre by itself.

[Note: An advance electronic copy of this book was provided to me by the publisher, Grove Press, as well as NetGalley in exchange for an honest review.]