Skipping Top Ten Tuesday again…I’ve got a backlog of reviews, so enjoy! 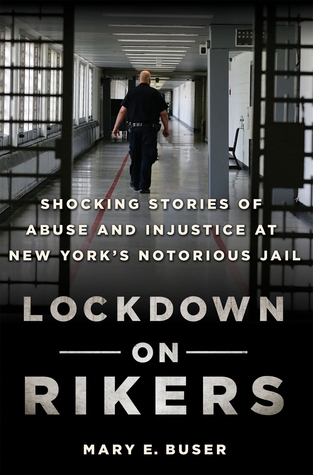 I went into this book based solely on its title, thinking it would be a critique of one of the largest and most dangerous prisons in America, the notorious Rikers Island jail complex located in New York City. The author spent time as a mental health therapist on the Island, a site of continuous controversy over its bureaucracy, officer corruption, violence, and the inhumane treatment of inmates. I also thought that this book would discuss solutions on what we could do as a society to reform jails and prisons. With both of these things in mind, I had high hopes for this book. However, this book does none of those things. What you get here is a therapist-in-training’s daily account of her interactions with inmates and her frustration with system bureaucracy and its treatment of mentally ill inmates.

I certainly understand Ms. Buser’s point in writing her story. It is a fact that many jail and prison inmates are mentally ill, and should be getting treatment and care for their conditions instead of jail time. However, this story is not particularly new or unique. We know that prisons aren’t good places for the mentally ill, and there’s been numerous exposes already written and filmed on this subject. While I commend the author for staying so long on this job and her compassion for the inmates, I am a bit disappointed that the focus of this book wasn’t more solution-based. If jail isn’t the place for the mentally ill and locking them in asylums aren’t either, then what, according to her professional opinion, is? Ms. Buser never tells us and stops far ahead of offering any kind of insight into this problem. Also disheartening is that the events here took place in the 90s, yet she is telling this story over 20 years later (this book was published in 2015). Wouldn’t this story have had much more of an impact 20 years ago? She does write an update of sorts in the epilogue, telling us very generally that “abuse on Rikers continues” but she cites few examples to back up this point.

The writing here is nothing special. I wouldn’t be surprised if the author took her therapy notes, copied them, and reconstructed it as the dialogue and events that you read about here. Overall, this is a very underwhelming story that could have been a lot more, had new insights been presented.

One thought on “Review: Lockdown on Rikers: Shocking Stories of Abuse and Injustice at New York’s Notorious Jail”