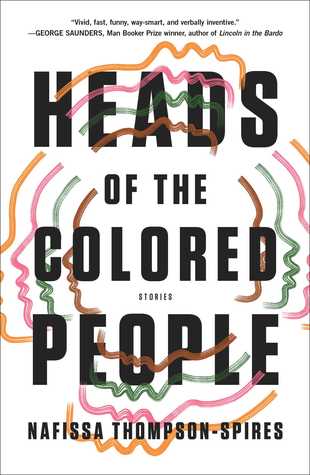 Short story collections are always hit or miss. You end up either liking some or none of the stories at all. The stories are either too long or too short, the plots are too much of the same or too loosely put together with little overall theme. “Heads of the Colored People” was an exception, I liked every last story in this volume.

Nafissa Thompson-Spires hits the ball out of the park with this one. All of these stories are of Black people living on the fringe of what’s considered “normal” behavior. In this volume, there are Black men who cosplay, Black women who do AMSR (yes–even I had to look it up), Black men and women with anxiety issues, Black women at war with their bodies, Black men professors who passively aggressively war with coworkers, Black millenials obsessed with social media attention. Some of the stories were connected, with several selections detailing the ongoing saga between two Black girl frenemies, Fatima and Christinia. Some of the stories were funny, some of them were quite cringe-inducing, but it was alright because it’s clear that they were meant to be that way. Clearly, Thompson is a writer who is not afraid to write with honesty and just go there.

In the end, I believe this book is effective because it achieves exactly what the title suggests. The author gets deep into what’s in the “heads” of Black people, which, we find out, are a multitude of pressures–the pressure of being the only Black person in their environments, the pressure of being a representation of what non-Black people think of when they conceptualize typical Black “behavior,” the pressure of being Black in American society. Questions like: how does one cope with being angry–without being perceived as the stereotypical “angry” Black man/woman? characterize this book, and I’ll be thinking about the answers for a long time after I read it.

I loved reading this from start to finish. I will definitely watch for future efforts by this writer.

One thought on “Review: Heads of the Colored People”