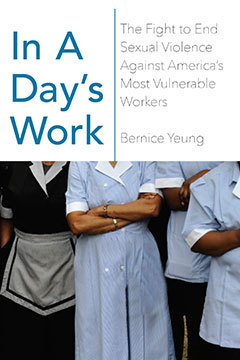 This is a very timely, informative read about sexual harassment and assault in the workplace among those whose jobs we rarely see–night office building custodians, farm workers, domestic workers. Many of these workers are female, and many of them are undocumented. They are often afraid to pursue legal action against the men who violate them due to their undocumented status, fear of losing their jobs, or because they simply do not think that they will be believed. In addition to the threat of rape from male bosses at work, these workers are also taken advantage of in other ways, like being forced to work for no pay, working in dangerous conditions, unpaid overtime, not allowed to take breaks, etc.

It is obvious that the Ms. Yeung has been working on this topic for a long time, and her knowledge of this topic shows brilliantly in her writing. There was a documentary that came on PBS’s “Frontline” about 2 years ago which reported on the plight of female farmworkers, another that came on about a year ago that reported on the sexual harassment of female custodians. I watched both of these programs. Much of the reporting on both of those stories (both excellent) were completed by this author as well. I also liked how the author gives solutions on how this problem is being tackled by new legislation and oversight committees that are currently in place, attempting to protect and make a difference in the lives of female workers.