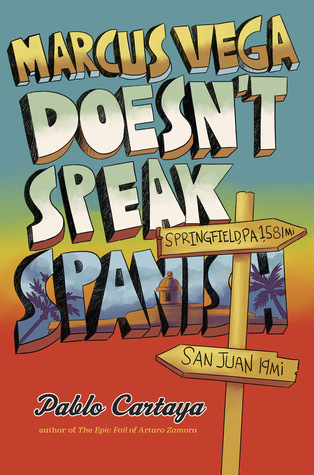 Ah, I liked this book. It’s a great junior high/middle grades story of family, culture, and dealing with adversity. It’s also a love letter to the beautiful island of Puerto Rico, which I had the chance to visit back in 2016 before the hurricane. Because this book conjured up so many great memories for me, naturally I gravitated to this novel.

Marcus Vega is an 8th grader who is 6 feet tall. He uses his size to walk bullied kids to and from school, to impose a littering tax, and keep kids’ cell phones during the day–for profit. He lives with his single mom who works long hours at the local airport, and cares for his younger brother Charlie, who has Down Syndrome. When another student at school makes a comment about his brother, Marcus attacks him and is suspended from school. Marcus’ mom uses the break from school to visit family in Puerto Rico, the place where Marcus was born. Marcus, who came to the mainland as a young child, does not speak Spanish. He also barely remembers any of his family there, particularly his father. He becomes interested in traveling to the island to meet his dad for the first time.

Once the family is in Puerto Rico, Marcus discovers an entire culture, language, and way of seeing his world that he previously knew nothing about. While I won’t reveal the ending of this book, I did feel that the ending was satisfactory, though bittersweet. All in all I loved the scenery of this novel: the colorful streets of Old San Juan, the music, the culture, the chirping of the coqui, the language. Much of the Spanish spoken by the characters isn’t translated, which is ok. This is Puerto Rico’s story.