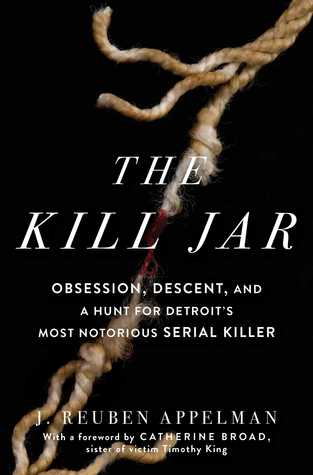 This is a dark, dark read. It’s so unrelenting in its darkness that reading it for hours on end was simply not possible without walking away for a few just to come up for “air,” if you will. The bleakness here is all the more pronounced due to the author’s revelations about his own life and his constant brooding while on the case. I’ll talk about that more later though.

Anyway, “The Kill Jar” is about The Oakland County Child Killer (referred to throughout the book as OCCK), a series of child abductions and murders in the wealthy outskirts surrounding Detroit in the late 70’s. All four of the victims were abducted and held in captivity for a period of time–in one case, nearly 19 days–before being killed and dumped in wooded areas. A task force was formed, however, nearly 40 years later, the killer remains unknown. For Appelman, who writes this book, the case is very personal–he was almost a kidnapping victim as a child. The experience obviously affected him very negatively, he becomes obsessed with the case. Appelman’s marriage, his relationship with his children, and his own temptations with substance abuse all become a part of his investigation of the OCCK, and this book.

Sadly, for everything the author sacrificed, very little info is actually revealed here. There’s evidence unearthed about a local child pornography ring with prominent community members in the 70’s that’s possibly connected to this case. There’s also evidence that the police withheld information, didn’t follow up on certain leads, and “lost” other leads that would have named a viable suspect. There’s also evidence that the reason why the police did not follow up properly is because one suspect in particular came from a very wealthy, high profile family. But that’s about it. Beyond what’s already mentioned is a whole lot of hearsay not backed by evidence, and all of the ‘definite’ suspects mentioned are either dead or simply not talking. These details are repeated throughout the book over and over again, as if this is all Appelman can come up with. It’s not good.

Then there’s Appelman himself. This book goes heavily into his private life with discussions of childhood abuse, violent thoughts, and the troubled relationship with his father. His depression is quite obvious, I felt bad for him. It is hard to know if his investigation is the cause of his troubles or an indicator of something else that is amiss. The fact that a person went around killing children in the 70’s and never got caught is already terribly unnerving and sad, but the author’s own constant ruminating about his life made this book a slog to get through. Short chapters are great, but they don’t transition well at all. For instance, one chapter is about the porn ring, the next about the author’s tendency to self-harm, the next is about the potential OCCK suspect, and the next about a woman (not his wife) that Appelman is pursuing.

What this book does do, however, is direct public interest back to the OCCK cold case. Comparisons between this and Michelle McNamara’s I’ll Be Gone in the Dark (2018) are inevitable, as they both deal with similar themes of cold case murders, an amateur sleuth, and obsession. McNamara’s book is much better though. Three stars.

One thought on “Review: The Kill Jar”