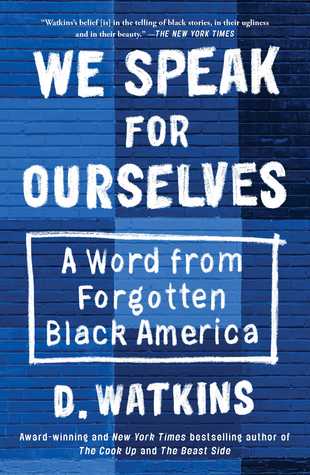 As with “The Cook Up” and “The Beast Side,” D. Watkins continues to share his account of growing up in an impoverished Black community in East Baltimore. The message behind his book is simple: in today’s age, poor Black people do not want or need to spoken for by White liberals or Black middle and upper class intellectuals. Watkins occupies a unique position in that he can easily maneuver among top thought leaders on CNN and the academic crowd, yet he’s hood at the core, never quite too far gone from the steps of his East Baltimore rowhouse. He writes about his days as a drug dealer with the same familiarity as the school to prison pipeline.

Here, he breaks down a lot of things that he wishes the world knew about Black culture: why poor people will always hate the cops, the reasons why education in urban areas will never be equal to the suburbs, etc. I gave this three stars because although it’s good writing and the message is clear for the audience he’s intending to reach, I found this book a bit too plain for me. Perhaps it’s because I’m not the intended audience–I’m pretty well versed in the issues he’s speaking of. Still, I don’t want to rate this too low because I like this book as well as the purpose behind it. I follow D. Watkins on social media and I’ll always support his efforts.