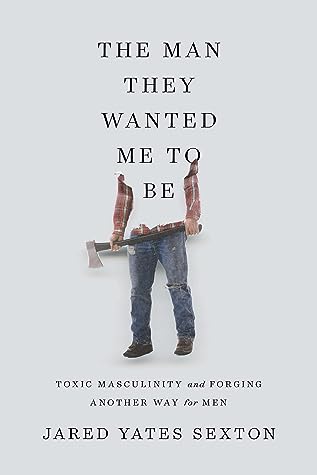 This book should be essential reading for all men, especially in today’s times.

In “The Man They Wanted Me to Be,” Jared Yates Sexton writes about his and his family’s experiences throughout a lifetime legacy of toxic masculinity. Much of the first section focuses on the personal experience of the author and the negative consequences of sexism and violence, which he witnessed through his abusive father. Jared, a sensitive child raised by a single mother in rural Indiana, eventually develops a tough emotional shell and becomes suicidal after years of abuse and bad role models due to his mother’s choices of men. He discusses the way in which the ‘ideal’ masculinity is essentially unattainable and not a real way of living but a lie. He also discusses the socialization of boys–the way in which parents and society train boys not to cry, to repress emotion, to hate all things ‘feminine’ and to express themselves through physicality and violence. The second section is about Jared’s relationship with his father and how they eventually reconcile after years of estrangement.

The third and the last section concerns itself with the ways in which toxic masculinity has given rise of the alt-right and the election of the current president. It is focused squarely on White men, who, let’s face it, need to do better. He discusses the toxic culture in this group that wraps itself in privilege and white supremacist ideas, in addition to sexist, homophobic, and xenophobic views against ‘them’ (namely minorities, women, LGBTQ individuals, and immigrants).

The only thing I wished this book would have touched on more is how sexism traps men of color as well as queer men. However, I realize that that discussion is a completely different animal. Although we’re still talking about bad masculinity, we know that there’s history, race, class, and other socioeconomic factors that change the flavor of the topic. I would like to read Sexton’s opinions on other aspects of this conversation, however.

Definitely do pick up this book. While I would not describe anything in here as particularly new or shocking, it is necessary reading to begin to undo much of the damage due to toxic masculinity.

4 thoughts on “Review: The Man They Wanted Me to Be”