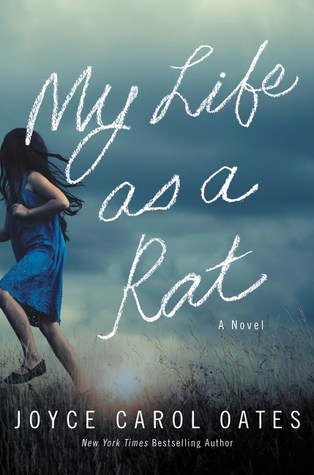 I’ve read numerous Joyce Carol Oates books over the years (The Sacrifice, Evil Eye, Lovely, Dark, Deep, Black Water, you get the picture). She’s ridiculously prolific, there’s about 60 novels to her credit and that’s not even counting her short fiction and other writings. Like any other writer, she definitely has her hits and misses, so every now and then I’ll take a Joyce Carol Oates book off the shelf and see what she’s writing about now. My Life as a Rat is her latest fiction novel.

This novel is the story of Violet, a 12-year-old girl living in upstate New York in the mid-90’s in a working class Irish American family with four brothers and two sisters. Although the children are physically cared for, expressions of emotion and love are minimal and her father rules over everyone with an iron fist. The boys in the family are clearly valued over the girls, with the oldest two sons Jerome and Lionel getting themselves into occasional trouble around town (one occasion being the rape of a mentally handicapped local girl). As always, Violet’s parents always get their boys out of trouble by hiring lawyers and protecting them from consequences or any severe punishment.

Eventually, Violet’s brothers graduate from rape to an actual murder. A popular Black student is riding his bicycle home one night and, because he appears ‘suspicious’ (there’s echoes of the Trayvon Martin case here) Jerome and Lionel run him off the road and beat him to death with a baseball bat. Violet sees the bloody bat and puts the two together, and, after an agonizing choice, tells administrators at her school what happened. She is instantly banished by her family for being a ‘rat’–placed into the custody of an aunt and told that she is not welcome to come home. Her brothers are jailed for their role in the crime.

Overall, this is a very difficult book to read. The novel goes into detail with how family violence and banishment shapes Violet over the course of her life, eventually leading to her being raped and sexually abused by a series of men during her teenage years. The book changes points of view and narrators and shifts from 1st, 2nd, and 3rd POVs. Violet’s thoughts wander often, as if she has had a split in her state of being. You really get the full impact of the tragedy and more.

This book is not badly written, but I think it was a little over the top. There is a such thing as TOO MUCH happening to a character, and this is one of those examples. There’s a lot of descriptions of sexual abuse that I think could have been left out–I got the point over 150 pages ago. The end hints at some kind of hope for the future, but not really. I kept reading because I did care about the main character, but by the end of the book I felt tired and demoralized, much like Violet.

I give this book three stars. Trigger warnings abound for rape, sexual abuse, and violence.