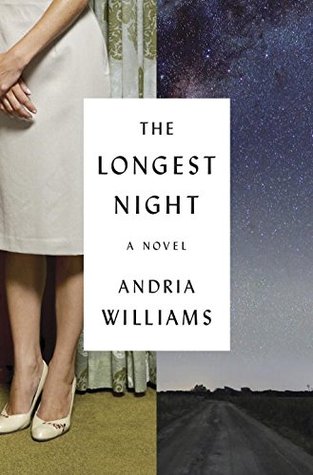 Review for “The Longest Night” by Andria Williams (scheduled to be published on January 5, 2016)

Hmm. I can’t go any higher than 3 stars here.

This novel is a historical fiction, based on a true event, the only fatal nuclear reactor incident in the U.S, which occurred in Idaho Falls, Idaho on the night of January 3, 1961. “The Longest Night” is set during this period at the military outpost there, where Paul Collier, the main character, works at the nuclear reactor site. Nat, his wife, is a young stay at home mom with two little girls who has trouble fitting into the socially acceptable role of a military wife.

Most of the story focuses on the nuances of Nat and Paul’s marriage–its history, its breakdown, and his eventual deployment to a remote nuclear station in Greenland for 6 months. In the background is the impending failure of Paul’s assigned nuclear reactor, mostly due to the incompetence of Paul’s narcissistic boss. Also in the background is Nat’s brewing attraction to a local man, which turns their community against them and threatens to rip their family apart.

The writing here is fairly decent. Andria Williams does an excellent job of setting the time and place of the early 1960’s. I could literally feel myself sitting in Paul and Nat’s house, seeing things the exact way in which she described them. Both Paul and Nat are constrained by the stifling roles that society and the military have forced upon them, and the claustrophobic nature of their marriage is completely apparent here. But this claustrophobia and frustration is drawn out in such painstaking detail that I almost didn’t finish this. For a long period in the middle of the book nothing really happens, you’re just stuck with the mundane thoughts of Paul and the ordinary, everyday observations of Nat. The beautiful writing ultimately keep me pushing forward, even though I knew what would happen to this reactor (duh) and I kinda knew what would happen to this couple in the end. For a book so finely crafted, the subject matter was unengaging and the plot was woefully predictable.

I would be interested in reading more of Andria Williams writing, especially with purely fictional subject matter. I would not be surprised if this book ends up on “Best Of” lists or gets selected for multiple book clubs in 2016. To be a first time writer, she definitely has talent.

[NOTE: This e-book was provided to me by the publisher, Random House, and NetGalley in exchange for an honest review.]