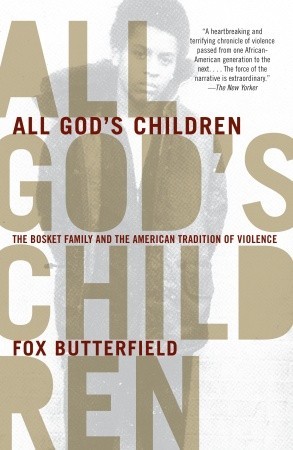 This book is fascinating. It’s a shame that the original hardcover edition is out of print and quite hard to find at any library in my city. In the end, I had to order it through interlibrary loan.

Anyway, “All God’s Children” traces five generations of the Bosket family, from their days as slaves in rural South Carolina all the way to Willie Bosket’s incarceration in 1978 as one of the youngest murderers in New York City’s history. At 15 years old, Willie, recently free from a reform school, killed two subway riders in cold blood and shot another. Under the laws of the time, the maximum he could get was 5 years. The public outcry was so great against this that the Juvenile Offender Act was passed later that year, making it possible that children as young as 13 could be tried as adults.

Fox Butterfield uses Bosket’s family history as a way to discuss the history of violence in America. Willie’s great grandfather was a violent man, his grandfather, as well as his father. Details of all of their lives and crimes are given here. He avoids the typical fluff arguments about the causes of violence (poverty, television, etc) and instead characterizes it as something deeply embedded into the fabric of American life, a product of the White slave-holding class, the pre-Civil War South. He also discusses the violence of reform schools and prison institutions whose function is to “correct” violent individuals. Willie believes he is merely the product of these institutions in its grossest form. I can’t disagree.

The amount of research in this book is exhaustive. I commend the author for writing this book. I just wish that it was more available in 2018.

3 thoughts on “Review: All God’s Children”