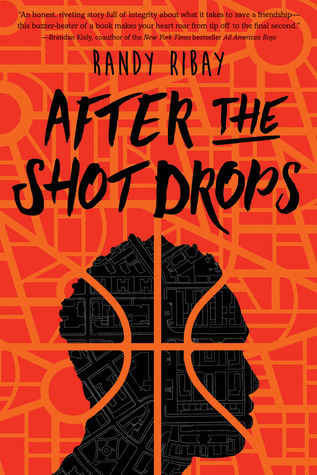 “After the Shot Drops” is the story of two friends, Bunny (affectionately named so because he’s got ‘hops’) and Nasir. When the novel begins, Nasir and Bunny are not on speaking terms, mostly because Bunny has recently transferred to an upper crust private school to play basketball without talking to him about it first. While Bunny realizes he’s out of place among his wealthy, mostly White peers, Nasir remains at his inner-city school and finds kinship with his cousin, Wallace, a troubled young man facing eviction. To earn quick cash, Wallace bets against Bunny in a final championship game–leading to very serious, life-altering consequences for all three young men.

I gave this three and a half stars because there are some issues here. For one, the pacing was entirely too slow. It took me nearly a month to finish this book, and that was because it failed to really maintain my interest for more than 50 pages at a time. We don’t find out until nearly page 150 that Wallace is up to something sinister that will ultimately change the rest of the book. Second, this book is written in dual narration, switching back and forth between Bunny and Nasir. While I’m not criticizing this method of storytelling, I was a little weary of the characterization here. The voices of Bunny and Nasir seemed indistinguishable, I couldn’t tell one from another. If the author hadn’t labeled who was speaking before each chapter, I wouldn’t have known who was saying what.

Third, during certain scenes of this book, there’s a lot of very technical, play-by-play basketball talk. While personally I like bball, there may be other readers that get kinda lost here. While I don’t think you have to love basketball to read this, liking it sure does help you get through those pages.

Overall, I think this is a fairly decent book. I love how it focuses on Black male friendship, a subject that I don’t think gets a lot of play in YA literature. As a matter of fact, I can’t think of a book that I’ve read in the past 5 years where a friendship between two young Black men was front and center, to the exclusion of other subjects. There are short, quick chapters here too, which tends to engage those students who are reluctant to read.